Consulting with clients on their social media strategy and implementation for more than two years has led me to one conclusion about how businesses should be using social  media:

The closer you can bring your brand to your customers, the better it will be for both of you.

In exposing as much of your brand to your customers as possible, fans hopefully become more passionate about your products, and your company learns more about how to please fans. In doing so, assuming that these fans are social media users, online word of mouth spreads goodwill about the company, brand loyalty increases, brand advocates are fostered, and precious market information can be gleaned and utilized for the future.

The problem is that traditional marketing never worked this way. In fact, traditional methods of marketing communication created a one-way wall between consumers and companies. Obviously, social media has made this one-way communication a two-way one, and now companies are struggling to better “listen to” and “engage with” their fans. Once companies have built out their social media infrastructure, they want to reach out to their fans and create social media brand advocates. Going beyond merely seeding “influencers” with freebies, there really is no better way to do this than the establishment of Brand Ambassadors.

How Much to Reveal to Brand Ambassadors?

The new problem then becomes: Are you really ready to fully expose your company culture to outsiders? It is something that companies need to think about sooner or later with regards to social media marketing because, at the end of the day, social media will naturally lead you down this path.

I recently had a chance to experience being a Brand Ambassador for a $17+ billion dollar Fortune Global 1000 company: The Japanese airline All Nippon Airways (ANA). As a Brand Ambassador, how much of their brand would ANA expose to their Brand Ambassadors? Or were we merely going to be exploited for our social media “influence” for the cheap price of an airline ticket?

The All Nippon Airlines Inspiration of Japan Case Study 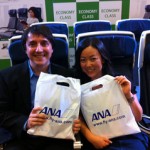 In many ways, the ANA Inspiration of Japan Brand Ambassador program, selecting four North Americans to celebrate the rollout of their new service between Los Angeles/San Francisco and Tokyo, could not have been more representative as to how a brand can fully and openly expose themselves to the outside world.  In doing so, it only arms Brand Ambassadors with much more knowledge about the brand – and content to share in social media.

The Brand Ambassador program all started at the party celebrating the announcing of the program. Not only were Brand Ambassadors allowed to invite friends (who turned out to be social media “influencers” themselves, leading to a reach of 5.6 million impressions in 24 hours at the #ANALAX event in Los Angeles), but it was an event at which travel agents, Japanese businesses, and ANA employees were present at.  Displays of the aircraft seating and samples of the cabin food were also provided.  Not only were we able to hear more about the brand from the displays and presentations, but we were able to interview ANA employees for an “inside look” into their brand.  It is having small talk with employees representing the brand where the interesting stories making up the brand reveal themselves.

Example of the Business Class Inspiration of Japan meal on display. 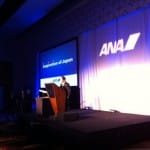 The All Nippon Airways “Official” Presentation

How many corporate executives would make themselves available for an interview with a Brand Ambassador?  Here is an interview I had the opportunity to do with Sunny Fujiki, Senior Vice President of the Americas for All Nippon Airways (ANA), about the launch of the new Inspiration of Japan service between Los Angeles and Tokyo, Japan:

The Inspiration of Japan Brand Experience

One of the highlights of being a Brand Ambassador was being able to experience the product: The Inspiration of Japan Business Class service between Los Angeles and Tokyo (Disclaimer: In exchange for being a Brand Ambassador, I received a free round-trip business class ticket from Los Angeles to Tokyo).  As I pondered in an earlier blog post entitled How Does Your Brand Experience Translate in Social Media?, if you are going to allow your Brand Ambassadors to experience your brand, it better be a positive one!  Not only was the flight one of the best ones I have ever flown, but the attention to detail that is so representative of the Japanese culture – as well as the aim of Inspiration of Japan to bring traditional Japanese hospitality together with modern technology – was existant all around me.

From the bathrooms that were equipped with the famous Toto “Washlet” toliets and filled with an wide range assortment of amenities to the meals that were as equally delicious as they were to admire before eating them.  I found out later that the parfaits that were offered for dessert, which actually change on a monthly basis, were handmade by the cabin attendants during the flight, adding a personal touch to the Japanese hospitality embodied in the ANA brand.  The other side of the Inspiration of Japan concept is the modern technology side, and once again the latest in moden convenience and style was on display, from the power ports easily accessible in front of the seat featuring universal power supply as well as USB charging capabilities to the LED-lit cool blue borders of each side table.

Exposing Your Brand Beyond the Freebies

Most influencer outreach programs end here.  The launching party happened, and the free ticket was provided and spent.  This is only the beginning for a successful Brand Ambassador program.

The closer you can bring your brand to your customers, the better it will be for both of you.

Me standing in front of the massive 767s at the ANA Haneda Aircraft Maintenance Center.

The four ANA Brand Ambassadors in front of a huge 767 jet engine.

What followed over the next few days in Tokyo was an incredible experience getting a very much inside look into the All Nippon Airways brand, and returning back to the United States in awe of the brand experience that ANA delivers.  The highlights from these few days include:

The finale of this blog post, showing how ANA eagerly opened up their brand to us Brand Ambassadors, was their willingness to allow me to interview an ANA cabin attendant while she was on duty.  For those of you who want to know more about the 787, here is why it is such a special plane, from the perspective of a cabin attendant:

ANA Brand Ambassadors at the Cabin Attendant Academy in Tokyo 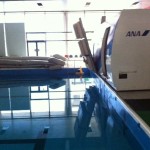 As you can see from this blog post, if you truly want to reach out to “social media influencers” and foster them to be your brand advocates, there is no better vehicle to do so than through inviting them to become a Brand Ambassador.  The only way to make such a program successful, however, is to truly expose your brand to them.

Is your company ready to fully expose your brand to social media users?  Would love to hear your thoughts.

The Founder and Editor-In-Chief of Maximize Social Business, Neal Schaffer is a leader in helping businesses and professionals strategically maximize their use of social media. Neal is the author of three social media books, including the recently published definitive social media strategy book Maximize Your Social. Forbes lists him as a Top 35 Social Media Power Influencer and AdAge lists his blog, Maximize Social Business (formerly known as Windmill Networking), as a top 100 global marketing blog. Neal provides social media strategy consulting and coaching, having worked with Fortune 500 companies and a Grammy-award winning musician. He has presented worldwide on social media at more than 150 events and also teaches social media marketing at Rutgers University. +Neal Schaffer