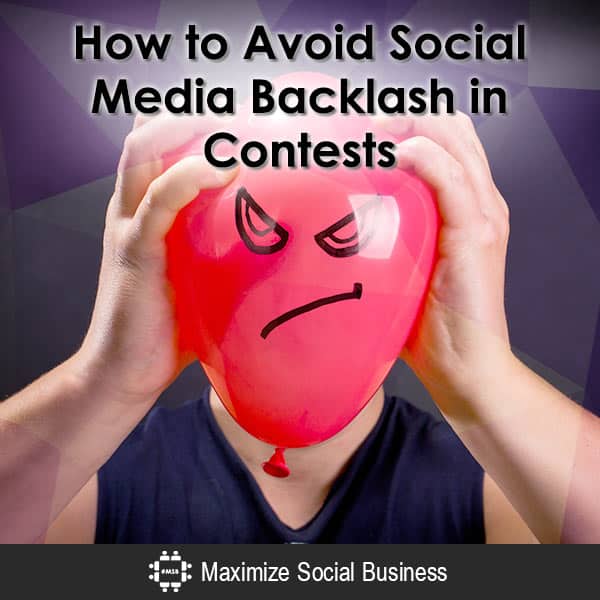 I wish I had a nickle for every email, post, message or tweet I get about some company, agency or sponsor not following their own contest rules. Sadly it’s so common, I’d be rich. What is worse, those same companies sometimes disqualify entrants without merit. Both of these actions have the potential to light a powder keg of social media backlash.

Let’s begin with one of my biggest pet peeves. Companies not following their own rules.

Some of the most common rules broken by sponsors are:

Why should this type of social questioning bother you?

Did you vet the potential winners?

Many companies don’t follow their own rules by also awarding prizes to entrants that should have been disqualified. This always leads to a wide-spread social media backlash, usually bigger than the original promotion, all with the wrong type of PR.

The blame can’t all be laid down at the feet of the sponsors.

With the anonymity of online profiles and the easy of creation comes rampant cheating. It’s easy for anyone to set up several Facebook, Twitter and Instagram accounts increasing their odds of winning a prize.

For those computer savvy, even contest apps that claim they prevent cheaters are vulnerable to being hacked and entries stacked. In October of 2015, Journal de Montreal uncovered a cheating ring involving more than 10 people, all connected to the mastermind.

There is no perfect system to catch all cheaters, but starting with social searches for similar profiles, and online searches for IP addresses, will weed out some of the culprits. If the Journal de Montreal can do it, so can you.

What can you do to ensure you are not awarding a prize to the wrong person?

Vet the contest database. Search the entries for duplicates, and any other criteria not following the official rules, then delete them. You would be amazed at the number of sponsors and agencies that do not take this simple step.

Do not rely on the drawing feature of sweepstakes apps as stated above, they can be hacked. Always export the database, search for duplicates and then conduct the drawing.

Depending on promotion, you may wish to hire a detective that specialists in sweepstakes delve deeper. Would you want to find out the person you awarded a big prize to on national television is a criminal?

Are they really cheating?

When money is involved jealousy can rear it’s ugly head. Don’t always take the word of a fellow entrants sending you messages, posts, tweets, etc. crying fowl about a specific entrant cheating. Listen and then conduct your own investigation.

The social outcry usually happens during voting contests. It’s why I recommend companies never host them.

Yes, there are people with large social media reaches, but votes can easily be bought. Google ‘buy votes’ and you get over 144,000,000 results. The votes suppliers are getting more and more sophisticated, allowing votes to be submitted by different IP addresses at different times so the votes look authentic.

I have also seen my fair share of petty online squabbles, mainly on Facebook, when jealousy reigns supreme, dragging the sponsor into a drama that shouldn’t have happened in the first place.

What can you do to ensure a smoothly run social contest?

What do you do to avoid social media backlash?

Carolyn Wilman (aka @ContestQueen) contributes a monthly column on Social Media Contests. Carolyn is a Digital Marketing Strategist and Sweepstakes Specialist. Carolyn works with companies to create, and viral market, winning promotions maximizing ROI and loyal customers along with teaching others how to Find, Organize, Enter and Win giveaways. +Carolyn Wilman